This protocol is used to synchronize clocks on MAVLink components by estimating their time offset.

The protocol uses just one message TIMESYNC, which has two int64_t fields: tc1 and ts1. A component that wants to synchronize clocks sends out a TIMESYNC request with its current timestamp in ts1. A remote system that supports the protocol sends a TIMESYNC response, including both the original timestamp and its own timestamp. The original system can use this information to determine the round-trip time, and estimate the timestamp offset.

This sequence is run multiple times and filtered/averaged to reduce the transient effects of the channel and processor usage on the offset calculation. 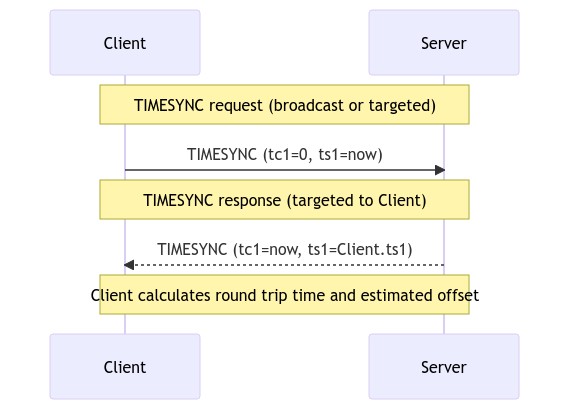 The offset is an estimate because the time spent, both inbound and outbound, will change over time based on things like link congestion and processing time. Therefore the above sequence might be run a significant number of times, and filtering used to remove outlying estimates.

A graph showing the "noise" when estimating the offset is given below (from PX4).

Version 1 of the timesync protocol uses the same message and sequences as version 2.

The difference is the TIMESYNC message in version 1 did not have target_system and target_component fields, and so the message was always broadcast. This could result in unreliable timesync if there are multiple synchronizing components on the network, because there is no way for a component to know whether a TIMESYNC response is to its request.

ArduPilot encodes the system id in TIMESYNC.ts1 of the request. This allows filtering of the response to a particular system (but not component), reducing the risk of clashes.

Version 2 makes adds the target address, so a syncing system can filter on just the responses to its requests.