MAVLink has been deployed in a number of versions:

The MAVLink 2.0 C/C++ and Python libraries are backwards compatible with MAVLink 1.0 (support both protocols). Version Handshaking and Negotiating Versions explain how to choose which version is used.

MAVLink v0.9 is a pre-release version that is no longer supported. The associated message set deleted in August 2018. Legacy code may be present in generator and test code.

A library's MAVLink support can be determined in a number of ways:

While messages do not contain version information, an extra CRC is used to ensure that a library will only process compatible messages (see Serialization > CRC_EXTRA).

Support for MAVLink 2 is indicated in the AUTOPILOT_VERSION message by the MAV_PROTOCOL_CAPABILITY_MAVLINK2 flag.

To do so, the GCS sends a COMMAND_LONG or COMMAND_INT message with the command ID MAV_CMD_REQUEST_PROTOCOL_VERSION.

If the system supports MAVLink 2 and the handshake it will respond with PROTOCOL_VERSION encoded as MAVLink 2 packet. If it does not support MAVLink 2 it should NACK the command. The GCS should fall back to a timeout in case the command interface is not implemented properly.

The diagram below illustrates the complete sequence. 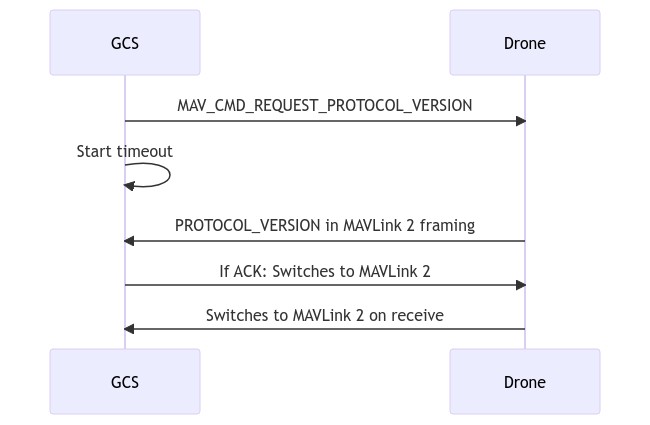 Some popular legacy radios (e.g. the SiK radio series) operate in semi-transparent mode by injecting RADIO_STATUS messages into the MAVLink message stream. Per MAVLink spec these should actually emit a heartbeat with the same system ID and a different component ID than the autopilot to be discoverable. However, an additional heartbeat could be an issue for deployed systems. Therefore these radios can alternatively confirm their MAVLink 2 compliance by emitting RADIO_STATUS in v2 message format after receiving the first MAVLink v2 frame.

The supported MAVLink library implementations enable different MAVLink versions on a per-channel basis, where a channel refers to a particular link in/out of a MAVLink system or component (e.g. a serial port or UDP port).

The next section explains how a system/channel should negotiate the version to use.

The following is meant to capture best practice for vehicle firmware and GCS authors: