This service is still marked as "work in progress", and should not be relied upon in production. It has also evolved since first created as the "Component Information Protocol".

The Component Metadata Protocol is a MAVLink service for requesting metadata from (and about) MAVLink components. It is intended to provide autopilot- and version- independent feature discovery and configuration, allowing a GCS to configure its UI and/or a device without knowing anything about the connected system.

Information shared using this service may include:

Information supplied by the service is assumed to be invariant after boot. There is no mechanism, for example, to provide an update if the set of supported parameters was to change after boot.

COMPONENT_INFORMATION is not used by thie service (it is a deprecated legacy version of COMPONENT_METADATA).

All schema files are versioned using a version integer.

Schema versions are backwards compatible - i.e. a ground station that was able to populate its UI from a file based on an older schema should be able to do so from a newer version (albeit losing information provided by the newer format).

Generally this means that new versions may add fields but should not delete them, and also that a recipient can ignore fields that it does not understand.

The schema are currently a work in progress and can be modified as needed. Once accepted, they will be under change control (managed in a similar way to standard MAVLink messages).

General metadata files must be stored on the device, and will usually be .xz compressed. The location of these files is returned in the COMPONENT_METADATA uri field.

Other component information files may be hosted on either the device or on the internet.

Where permitted by memory constraints you should host component information on the device (so that it is always available and cannot get out of sync).

Files on the device are downloaded using MAVLink FTP. The URI format is defined in MAVLink FTP URL Scheme. A typical parameter metadata URI might look like this: mftp:///component_metadata/parameters.json.xz.

Files on the Internet are downloaded using HTTPS or HTTP via a normal web URL (e.g. https://some_domain/component_metadata/parameters.json).

The COMPONENT_METADATA message includes the file_crc field, which contain CRC32 values calculated for the file referenced in the uri field. A ground station should cache downloaded component metadata and only update it if the CRC value changes.

The general metadata file similarly provides file locations for other metadata supported by a component. It will also include CRC32 values any files that contain only static data (no CRC32 should be supplied for metadata files that might be updated dynamically).

Component information files may be .xz compressed (this is recommended for files that are hosted on the device).

The prototype implementation generates and compresses component information files at build time. No compression library is required within the flight stack itself.

A GCS can broadcast the MAV_CMD_REQUEST_MESSAGE specifying param1=397; all components that support the protocol should respond with COMPONENT_METADATA.

A GCS can further discover all components in the system by monitoring the channel for HEARTBEAT ids, and then send the request to each of them to verify whether the protocol is supported. The broadcast approach is recommended for GCSes that don't track all components on the link.

Check if Protocol is Supported

A system can query whether another component supports the protocol by sending the command MAV_CMD_REQUEST_MESSAGE (specifying the COMPONENT_METADATA message).

A component that supports this service must return a general metadata file URI that is hosted on the vehicle (accessed using MAVLink FTP).

The basic sequence is shown below. 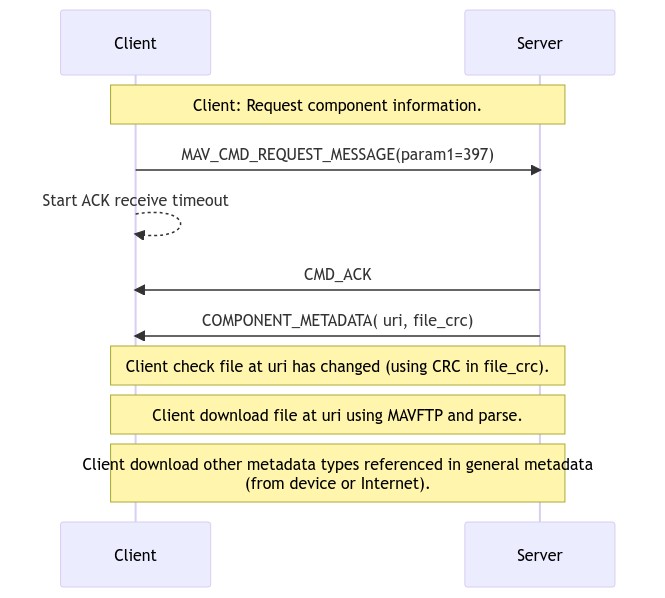 The actuators metadata allows a GCS to create a UI to configure and test actuators, and configure vehicle geometries, without having to understand anything about the underlying flight stack.

The mechanism works similarly to camera definition files. It can be used for flight stacks that allow outputs and geometry definition to be configured using parameters. If flight stack outputs or geometries cannot be configured using parameters, the mechanism can still be used to display the current geometry and output mappings, and to test outputs.

The definition contains information about actuator output drivers (e.g. PWM MAIN or UAVCAN), the functions that can be assigned to each output channel, supported geometries, and their configuration parameters. Detailed information can be found in the schema file, and there's also an example.

Specifically, the following information is provided:

This is being prototyped. Once there is a working version, the approach will be documented here.

Schema management has not yet been signed off.

There is a concern that vehicles reliant on internet-hosted component information files may stop working if the hosting ceases.

This can generally be avoided by hosting the files compressed on-vehicle.

We propose that manufacturers that use autopilots with limited flash (1MB or below) and do custom firmware development should host the files in github.